The Environmental Protection Agency requires all factories and plants that use hydrofluoric acid to prepare an “Offsite Consequence Analysis” report detailing the projected effect to the community if the chemical were to be released. ExxonMobil used the following conditions as their “worst-case scenario” for the Torrance refinery:

In this scenario, ExxonMobil estimates exposure levels inside the red circle would be above classification ERPG-3. This level of exposure would be life-threatening for most individuals, especially children, the sick, and the elderly. Individuals inside the black circle would be exposed at ERPG-2 levels, meaning most individuals would experience “irreversible and serious health effects.” Approximately 256,000 residents of Torrance, Redondo Beach, Hermosa Beach, Lawndale, Gardena and Carson live within the black circle.

It’s important to keep in mind that ExxonMobil actually store approximately 250,000 lb of modified hydrofluoric acid on site at any given time. If an earthquake, explosion, or other catastrophic event ruptured multiple containers of gas, the results would be even worse than this “worst case scenario.”

The consequences of a hydrofluoric acid release depend greatly upon the prevailing winds when the release occurs. By analyzing the plume of debris and ash generated during the February 18, 2015 incident, we can estimate where most of the gas would have drifted if modified hydrofluoric acid had been released that day. The blue ellipse indicates that communities that would have been most affected: 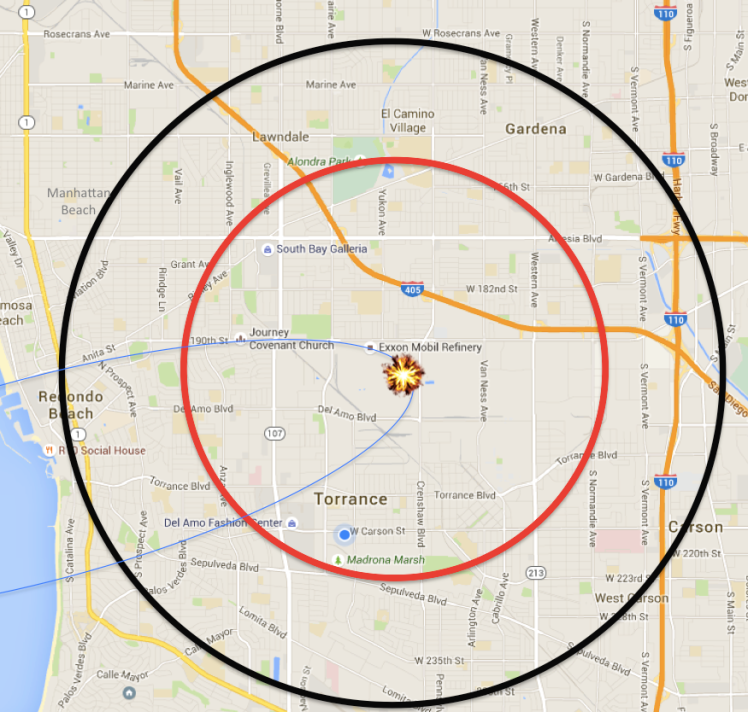 The Valero refinery in Wilmington keeps more than twice as much modified hydrofluoric acid on site as the Torrance refinery does (578,000 lb vs. 250,000 lb). Their single largest container holds 55,000 lb of gas. Using the same conditions as ExxonMobil’s “worst case scenrio” above, here are the communities at risk for “serious and irreversible health effects” in an incident at the Wilmington refinery: 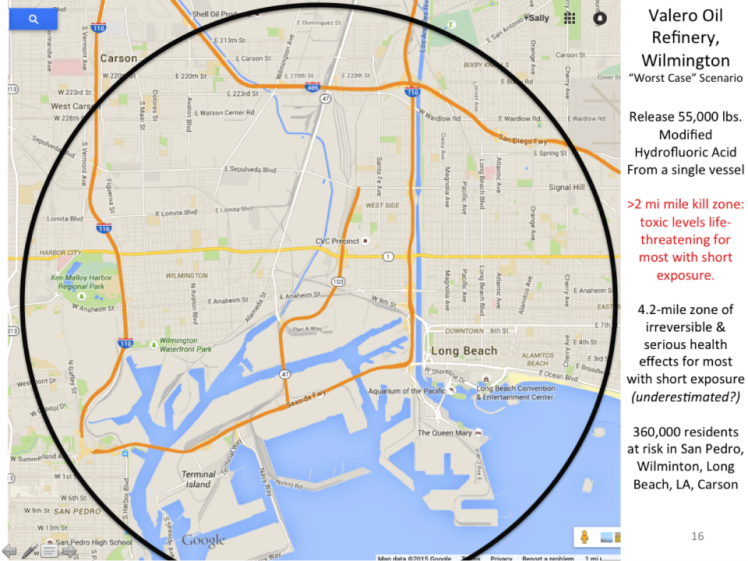